After our humble rest in Aqaba, our group of explorers decided it was time to leave this ancient town. All the sights have been seen and all the needed cargo to continue our trip has been acquired. It was time to find the fabled Wadi Rum. Known as Roman Valley or Valley of the Moon. So many stories are circling around but so few people have even seen it. We hope to be the lucky ones to find it! 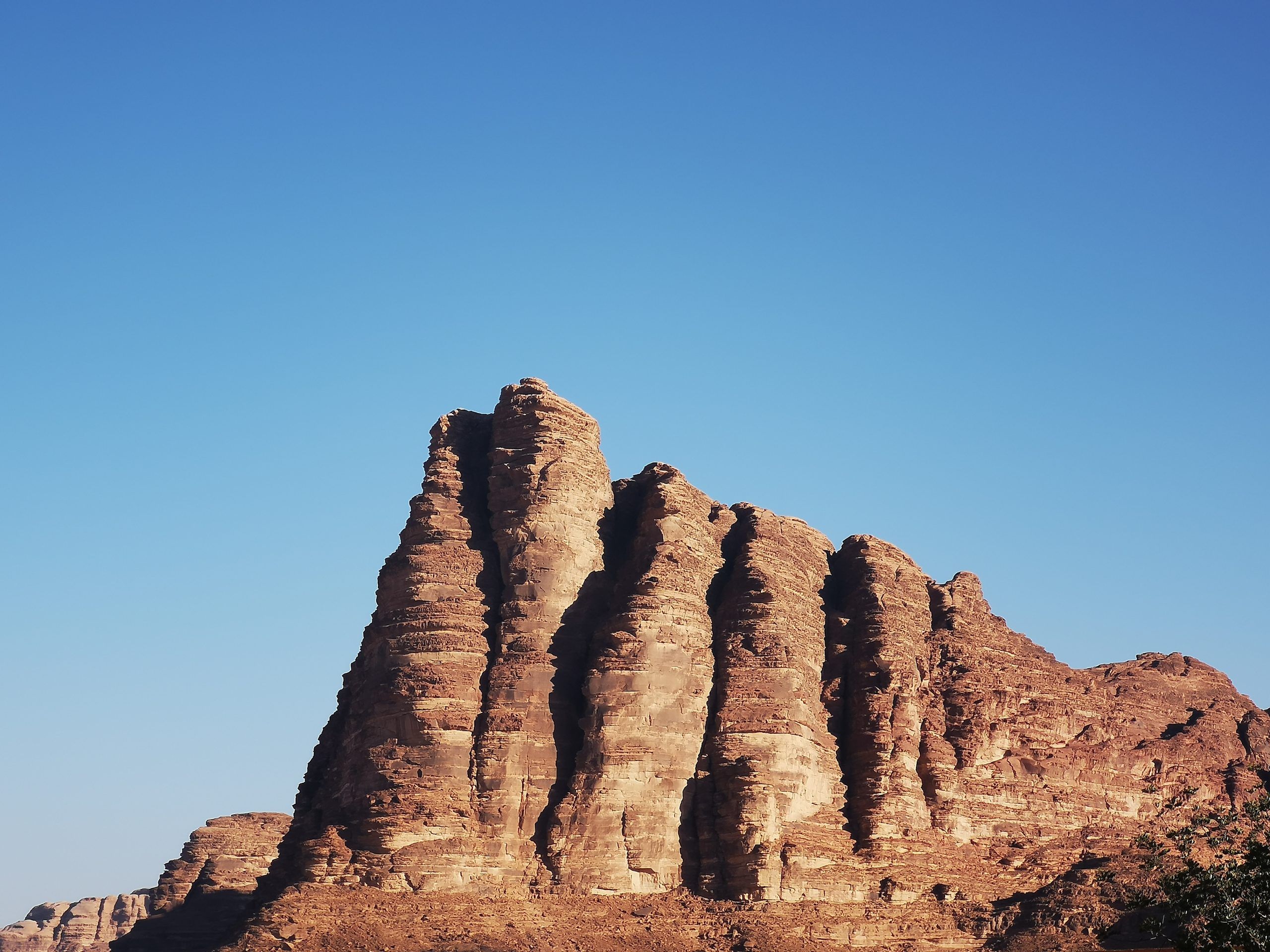 From what we know – the stories and recaps from the people, the historic scripts and legends Wadi Rum has been inhabited by many cultures since prehistoric times, including the Nabataeans that left their mark in the form of rock paintings, graffiti, and temples. Kingdoms and people used to come here for the abundance of springs and wild game in the desert.

Surprisingly it did not take to much time for our expeditionary caravan to find the outskirts of the Wadi Rum desert. Before we left for the trip to Wadi Rum we heard from the locals that it is not advisable for the Red Sea deep explorers to do the voyage on the same day as diving. Because the altitude goes right away from 6M to 1600M above sea level. The explorers of the deep can easily catch the eeriness of the mountains and get mountain sickness.

Our trip took us through the outskirts of the desert, across the railway which local Bedouins and T.E Lawrence blew up during the uprising against the Turkish. The same railway that required to cut a large number of trees in Jordan just to build it. All the way through the hot desert until we reached the hidden Bedouin village that is guarding the heart of this wonderful dessert. From here you join the local Bedouins going to their campsites. 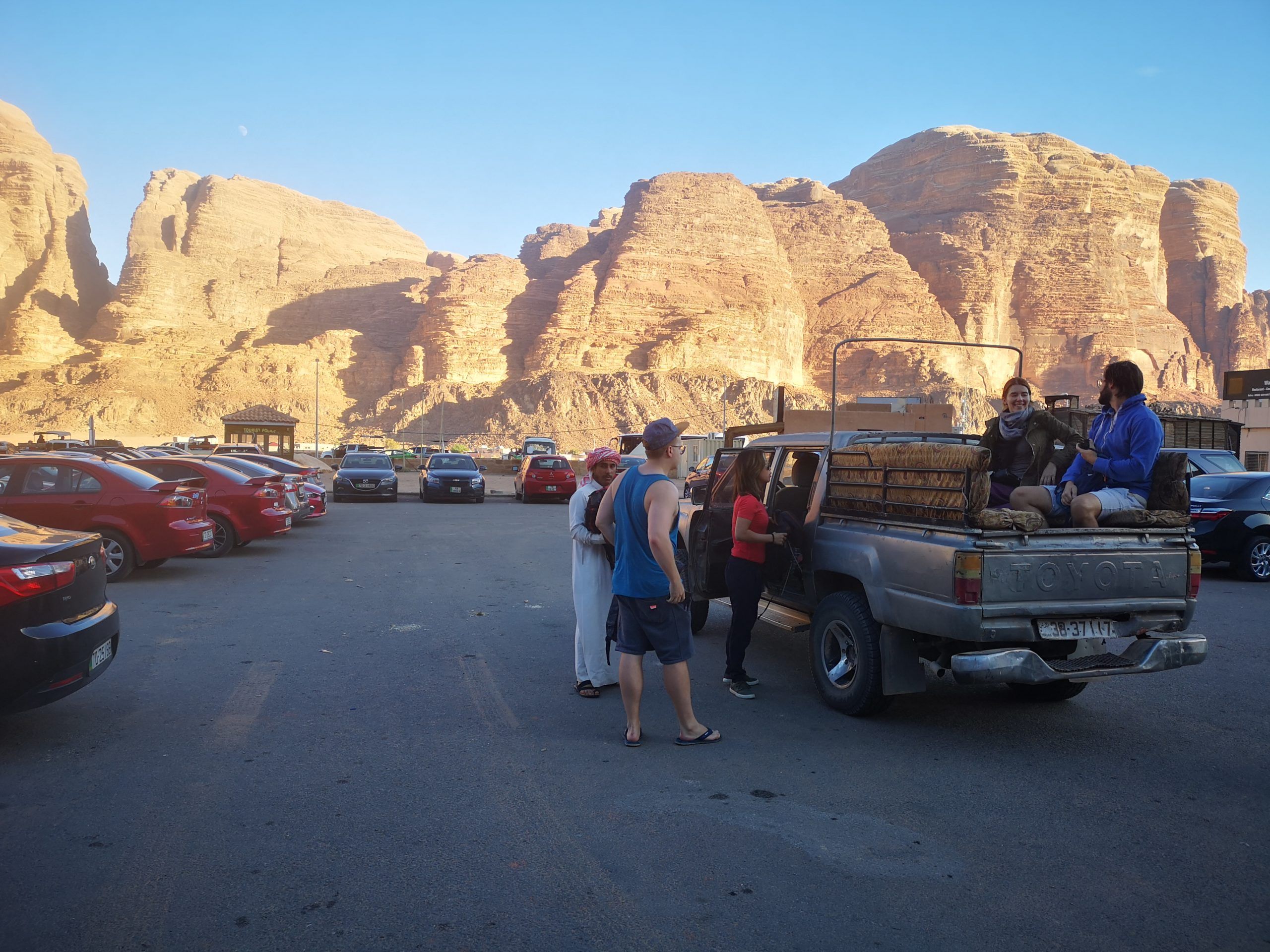 It is best to have prearranged your stay with one of the local Bedouin to be waiting for you before even arriving. To save time and to know exactly where you are going. We did it using a well-established system of connections – Booking.com. The moment we stopped and got off our caravan the local Bedouin was already waiting for us.

The Bedouins are not the only inhabitants of the wadi rum. This desert is not like the one we hear with sand and dunes everywhere you look. It has over 160 species of plants that belong to almost 50 different plant families:

We saw maybe 3 different plants during the 3-day stay.!

Without giving a moment of rest we joined their caravan (a jeep) and went through the vast expanse of the desert to his small campsite. 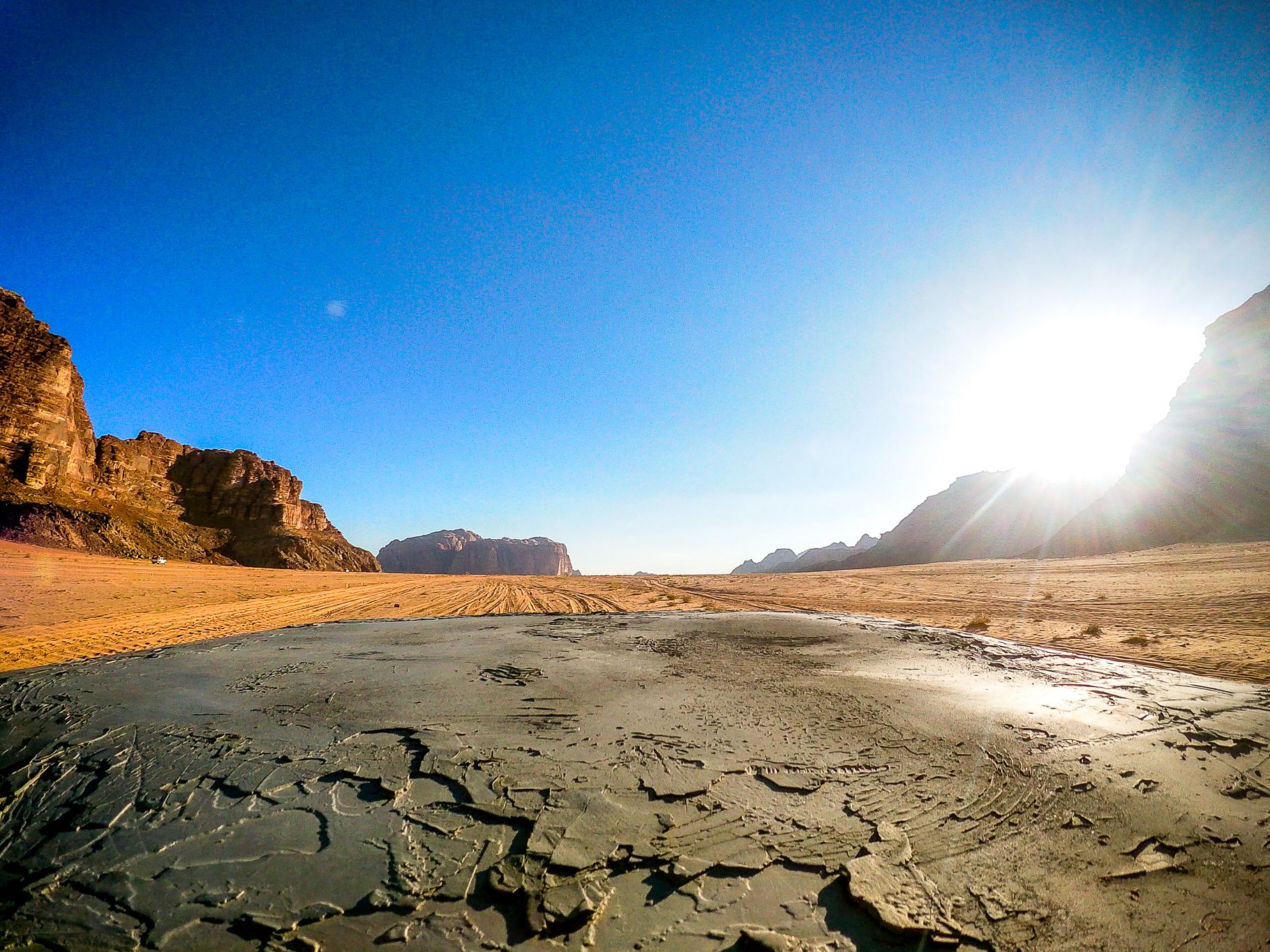 The views we saw, even now when I write I can see them. The only problem is to describe them. The deserts and the mountain tops that are visible creates a magnificent feeling and illusion that captivates the travelers to simply stay silent and be in awe. It is a place that brings serenity to your soul and peace to your mind. The quietness for the most part and hypnotizing views leave few unimpressed. 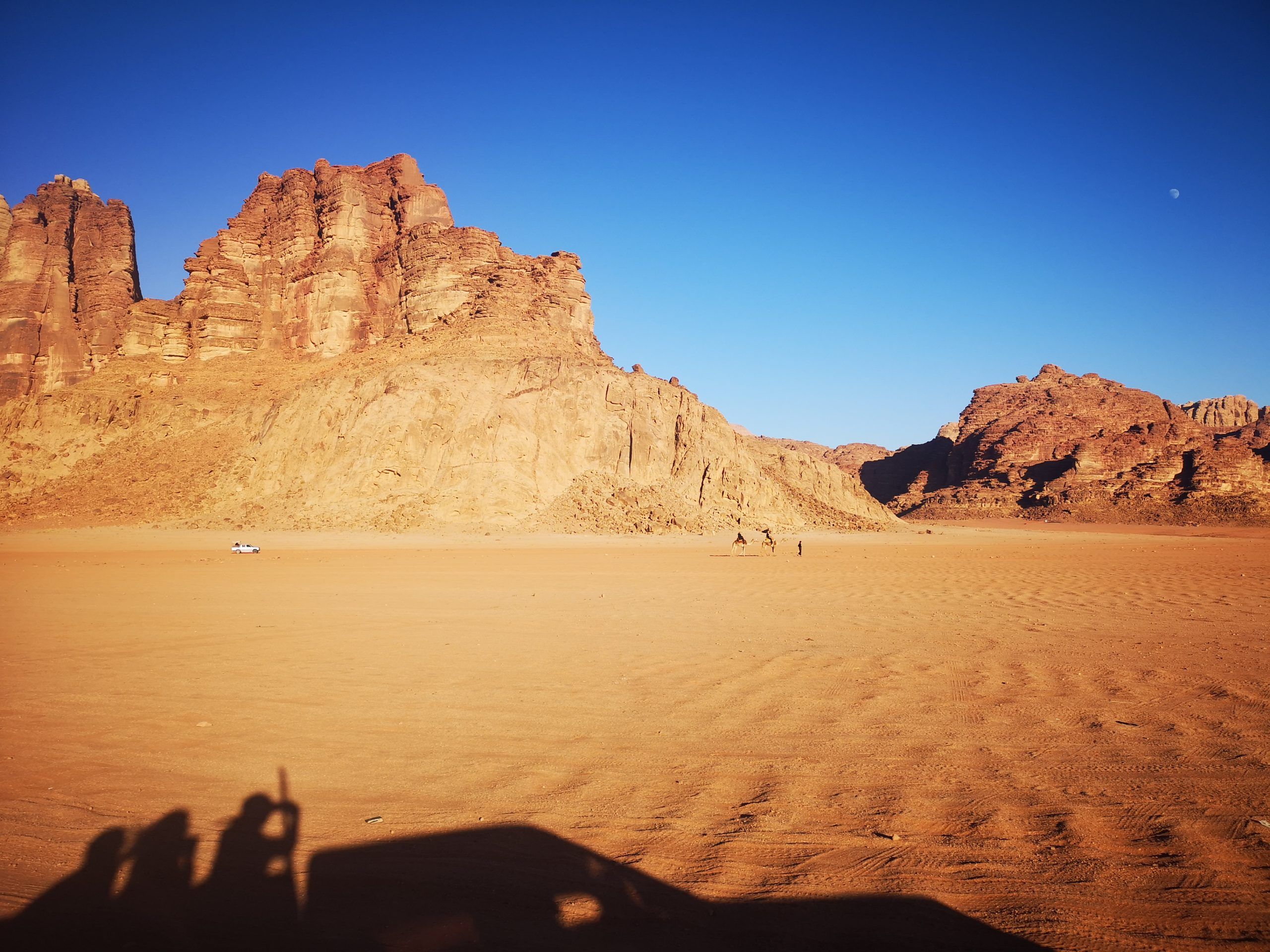 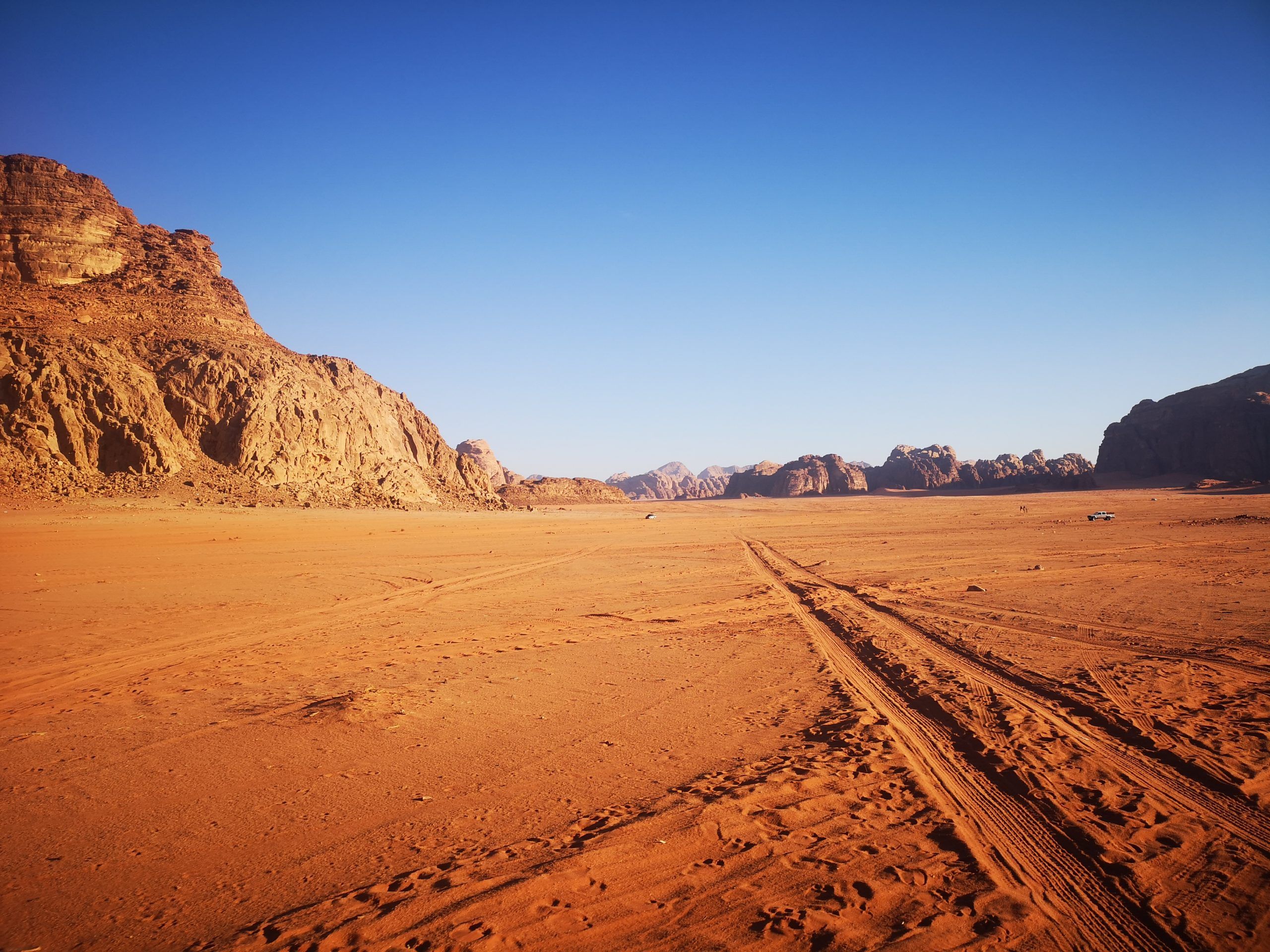 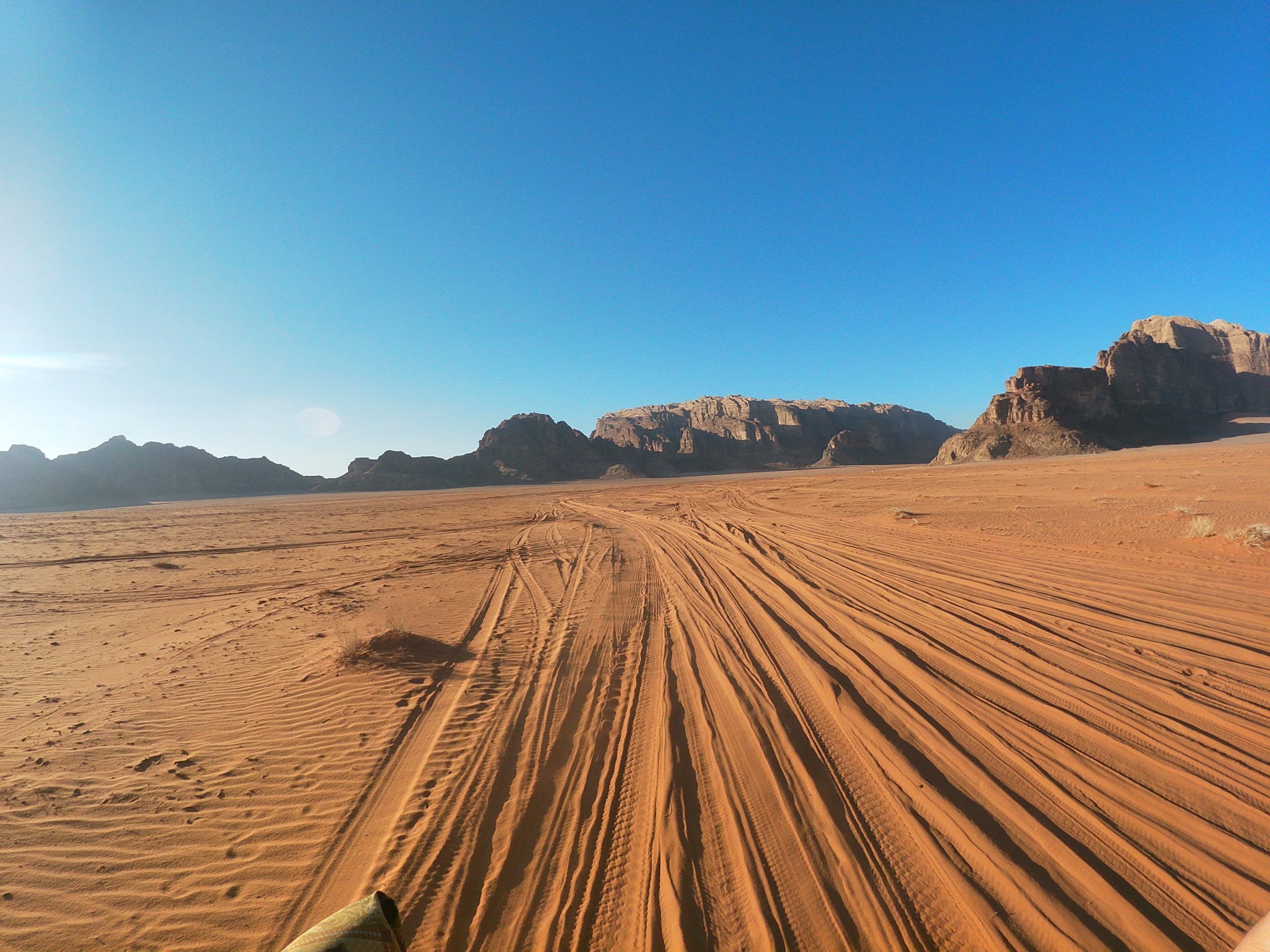 The moment we arrived at the camp that was located in a remote area far away from any other tribal campsites. Located in a small corner between the mountains to have a shade from the sun during hot summer days. 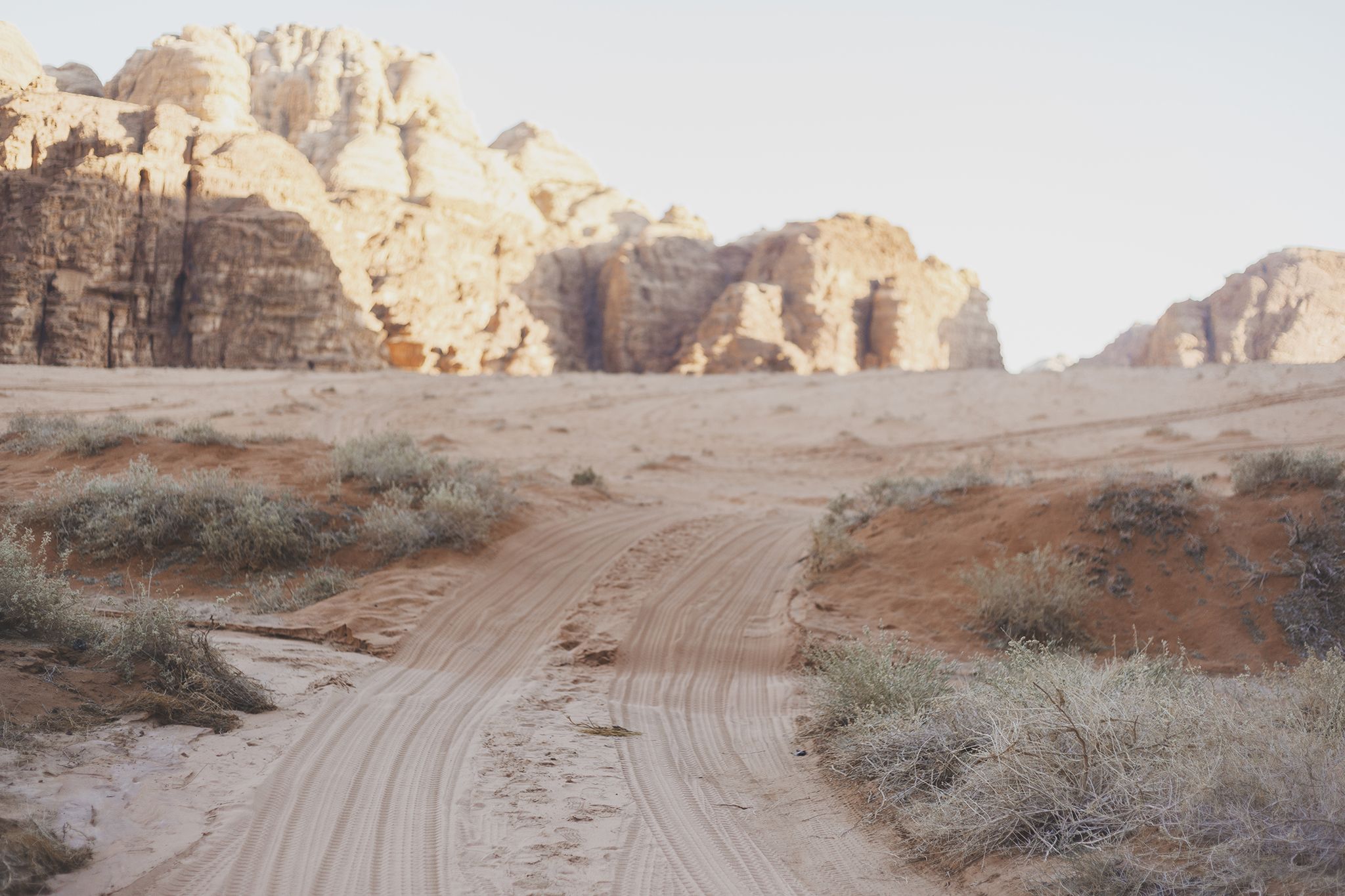 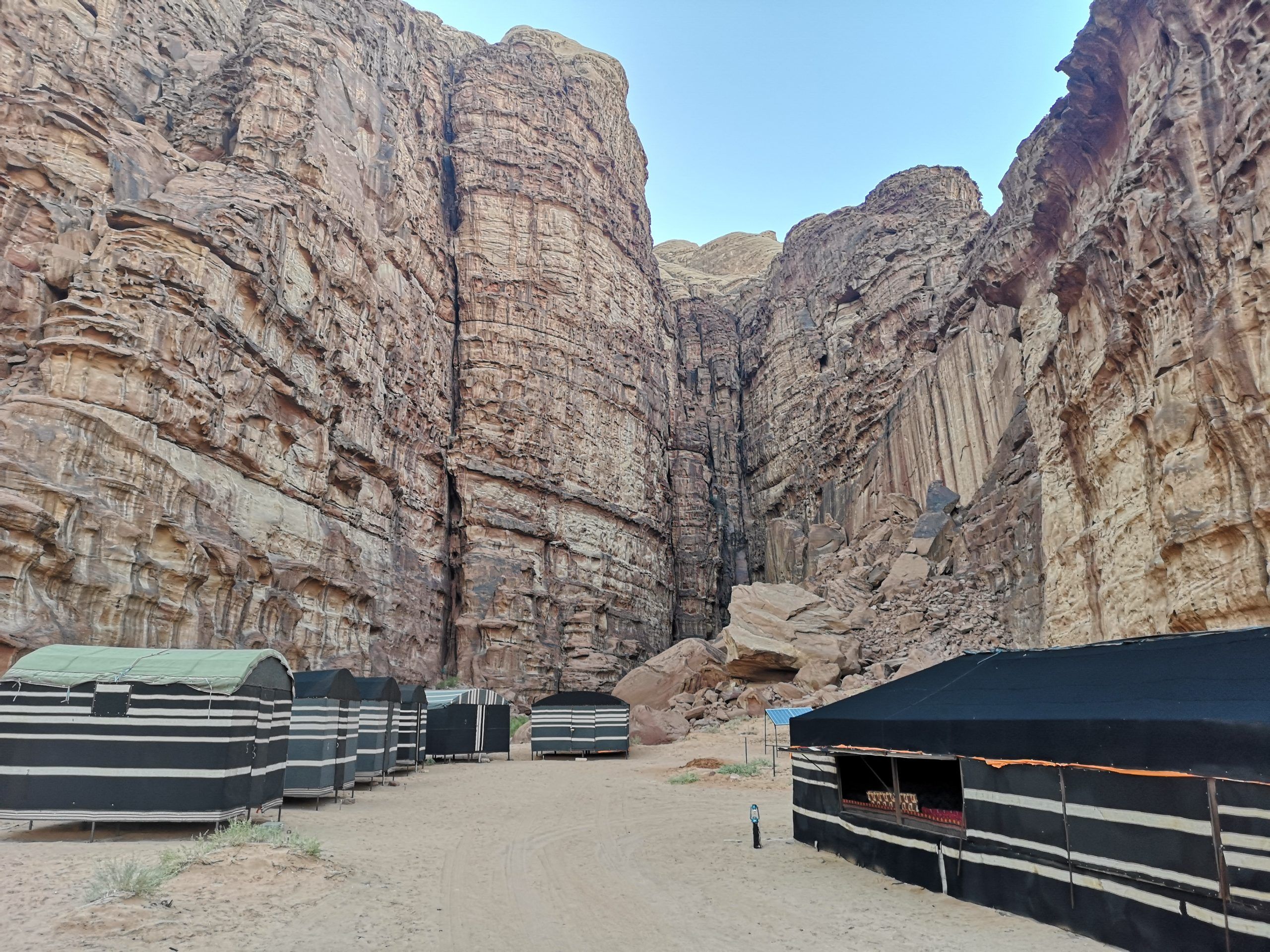 We were greeted with tea and snacks. For it is their creed-rooted in the harshness of desert life-that no traveler is turned away. According to Bedouin traditions, the host does not inquire about the guest’s personal information or the reason behind the visit for the first three days as it was considered rude. Of course, this has slightly changed with the arrival of tourist for business purposes but you can still feel it. We did not talk about our next day trip until the last moment right before we went to sleep.

If you were wondering who are the Bedouin or Bedu well they are a grouping of nomadic Arab people who have historically inhabited the desert regions in North Africa, the Arabian Peninsula, Iraq, and the Levant. The English word bedouin comes from the Arabic badawī, which means “desert dweller”, and is traditionally contrasted with ḥāḍir, the term for sedentary people. Bedouin territory stretches from the vast deserts of North Africa to the rocky sands of the Middle East. They are traditionally divided into tribes. Historically, the Bedouin engaged in nomadic herding, agriculture and sometimes fishing. A major source of income was the taxation of caravans, and tributes collected from non-Bedouin settlements. They also earned income by transporting goods and people in caravans across the desert.

After resting for a short while we decided to explore the desert before good night sleep. We walked for a better half an hour until we reached a crossroad where we thought we could see the sunset well. 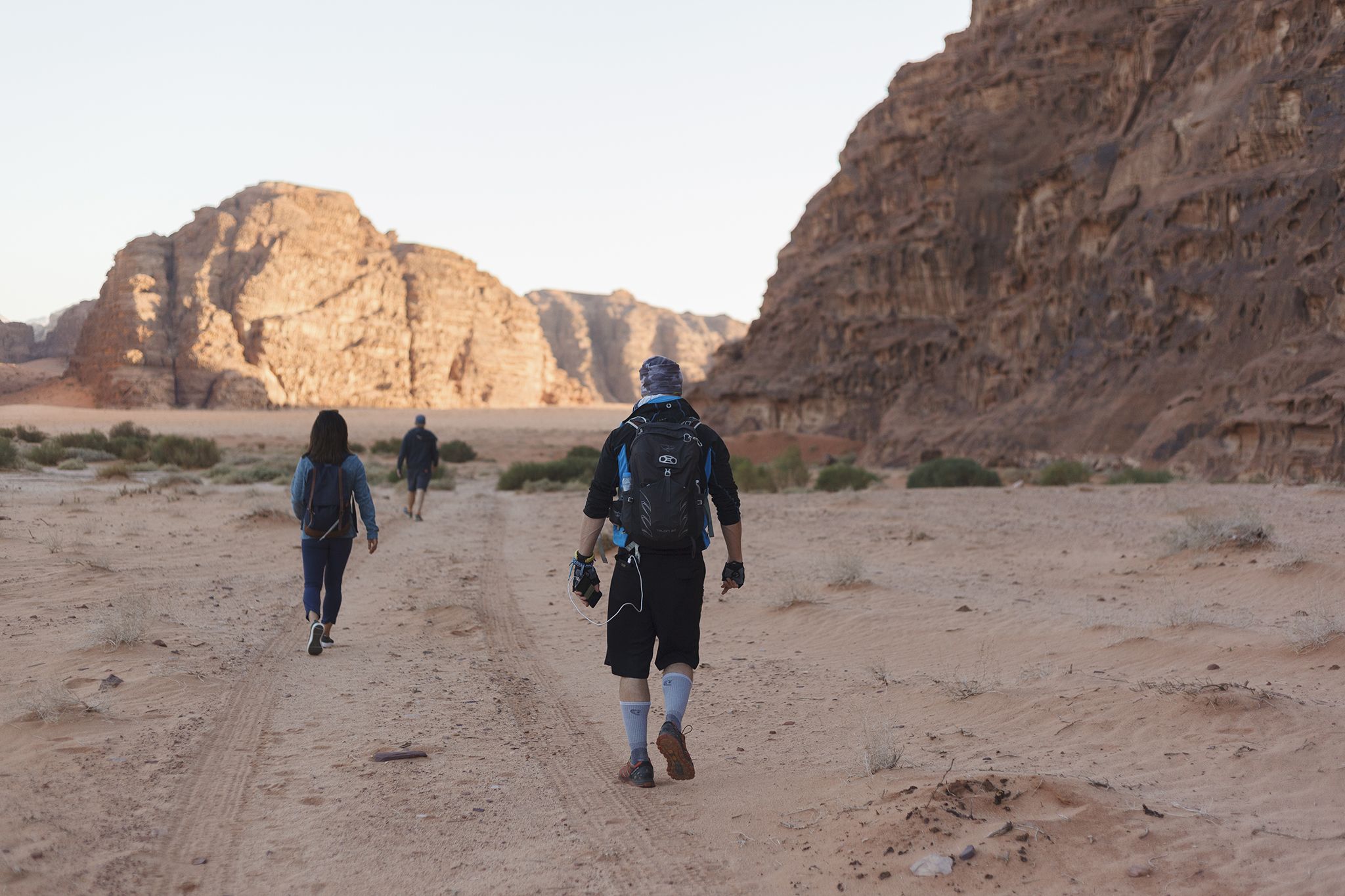 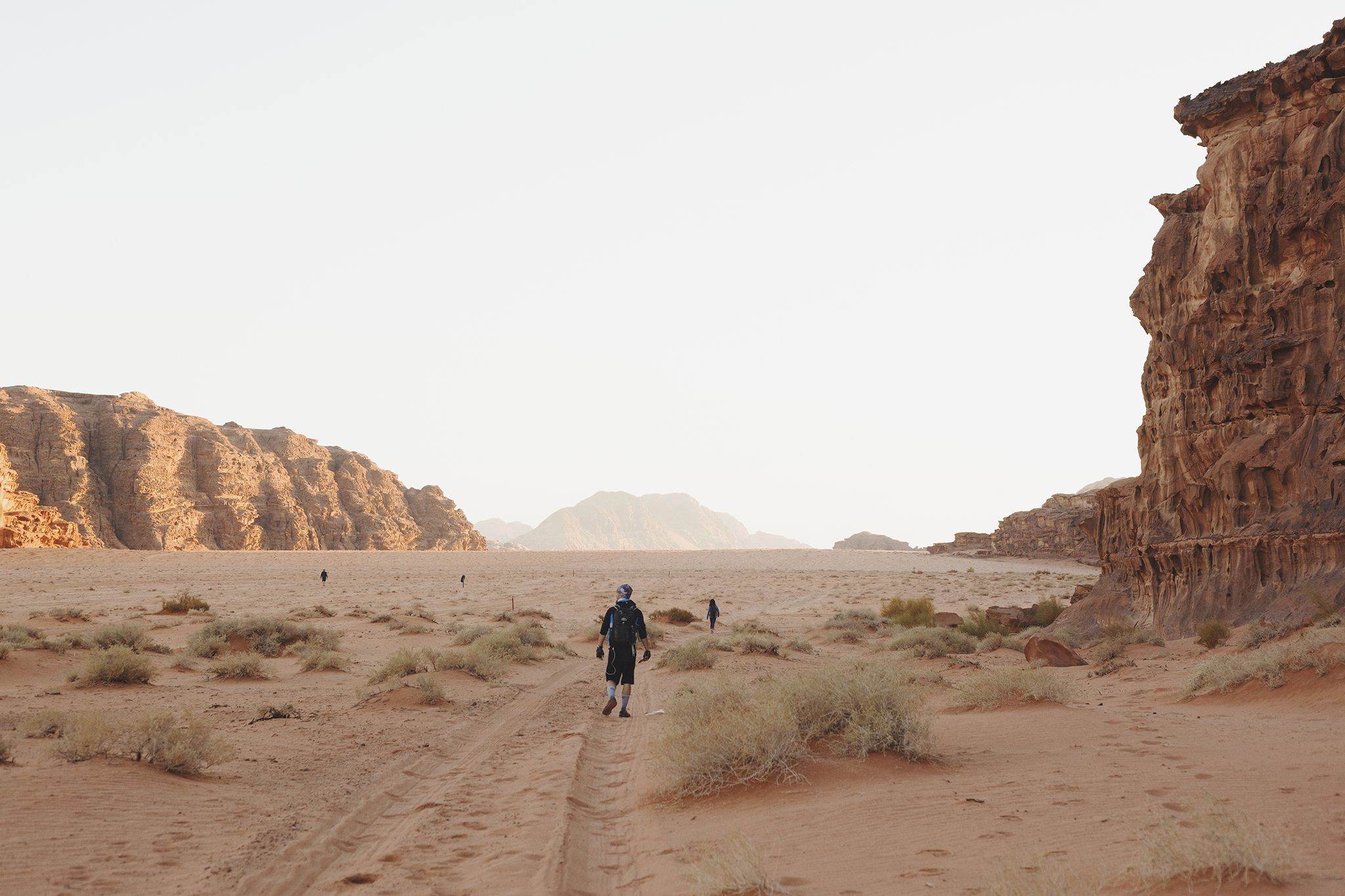 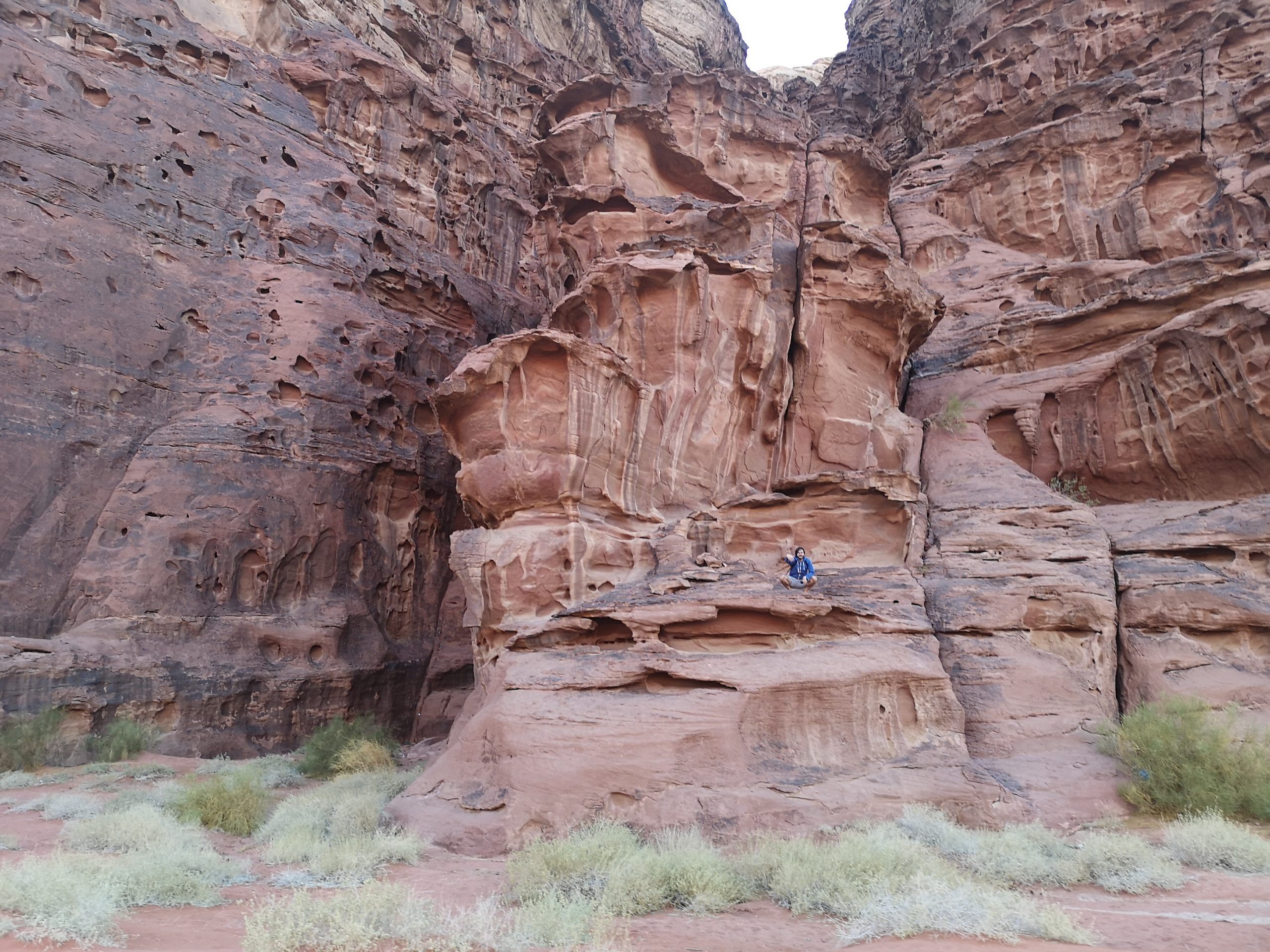 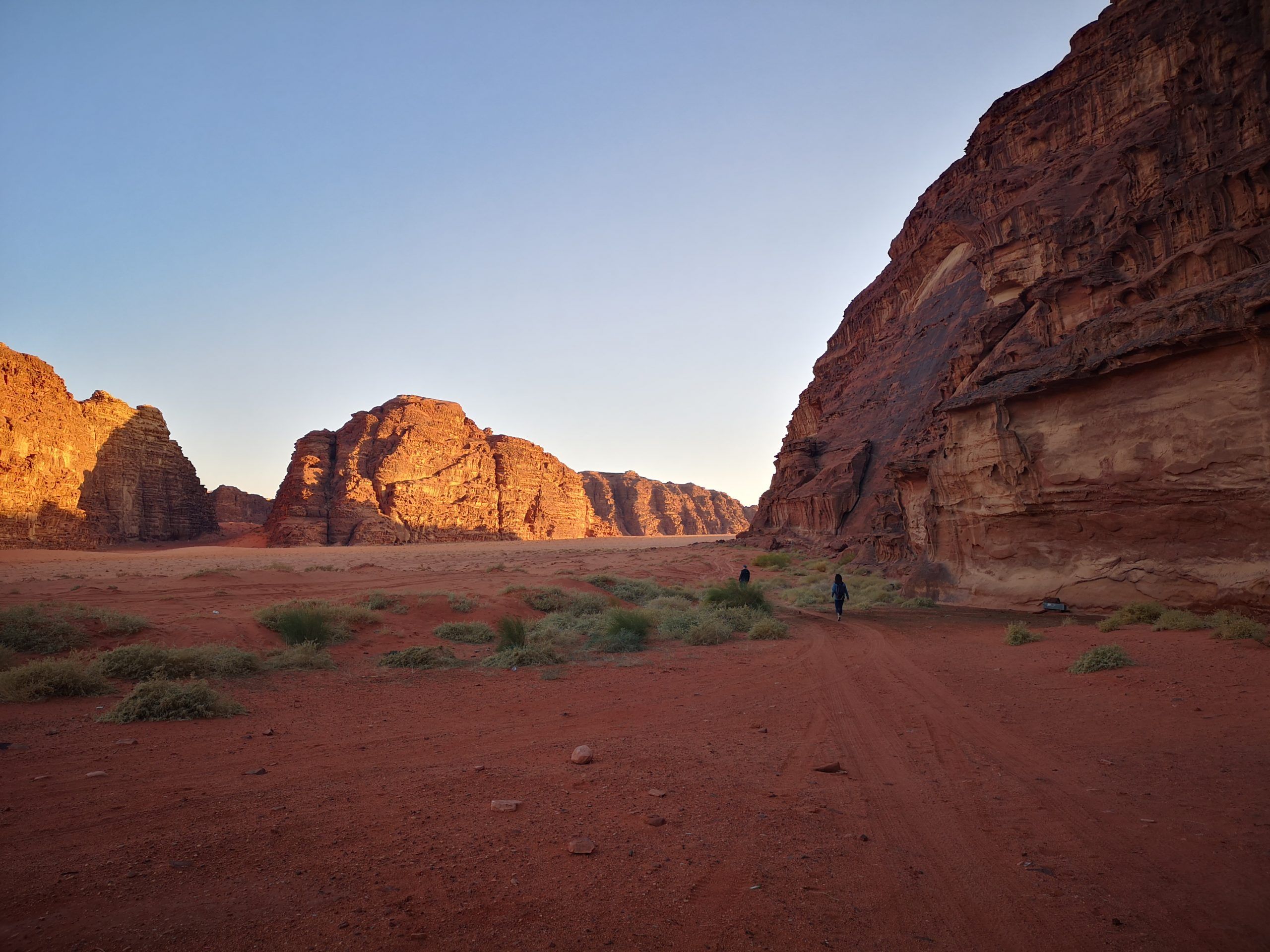 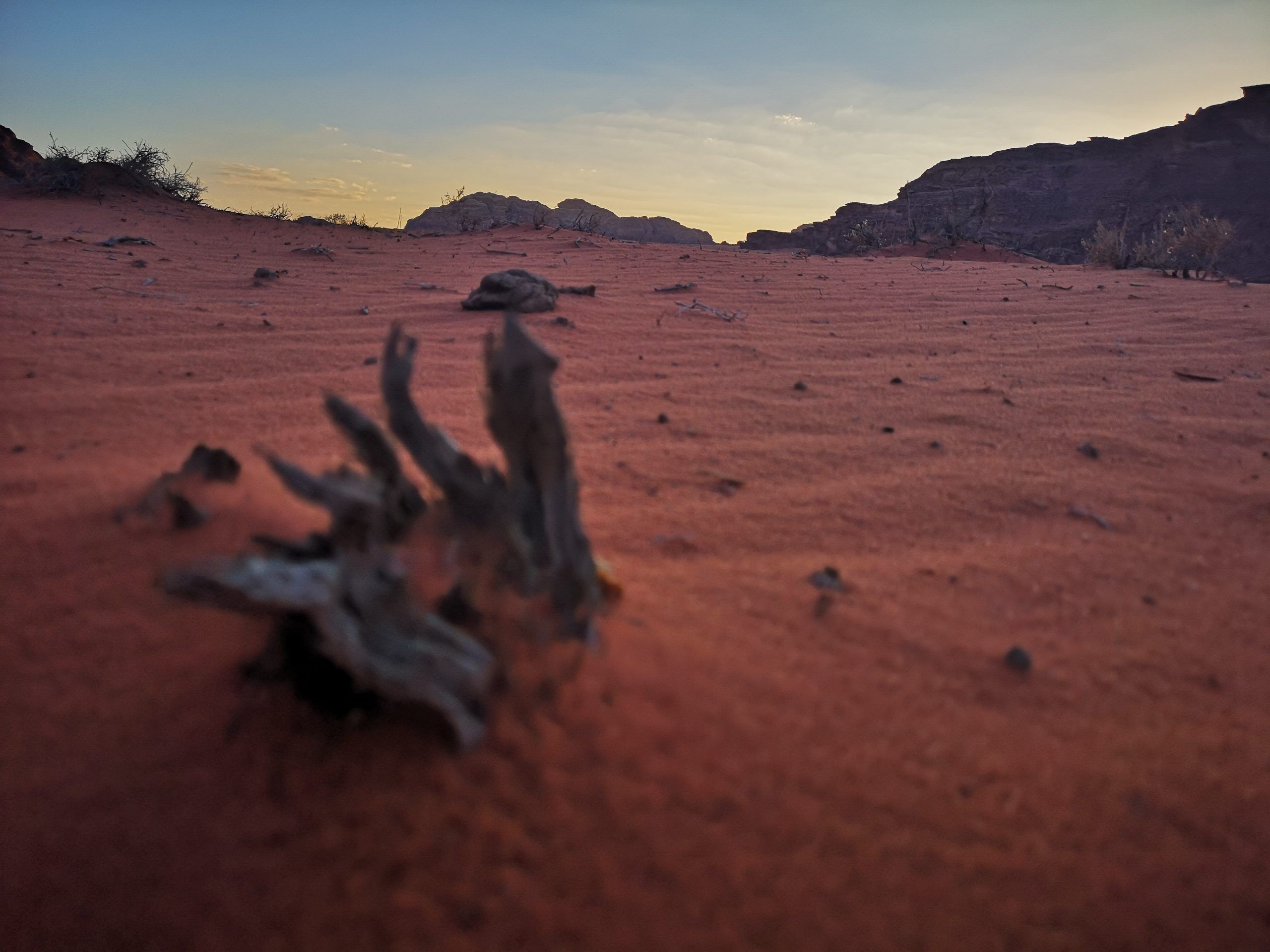 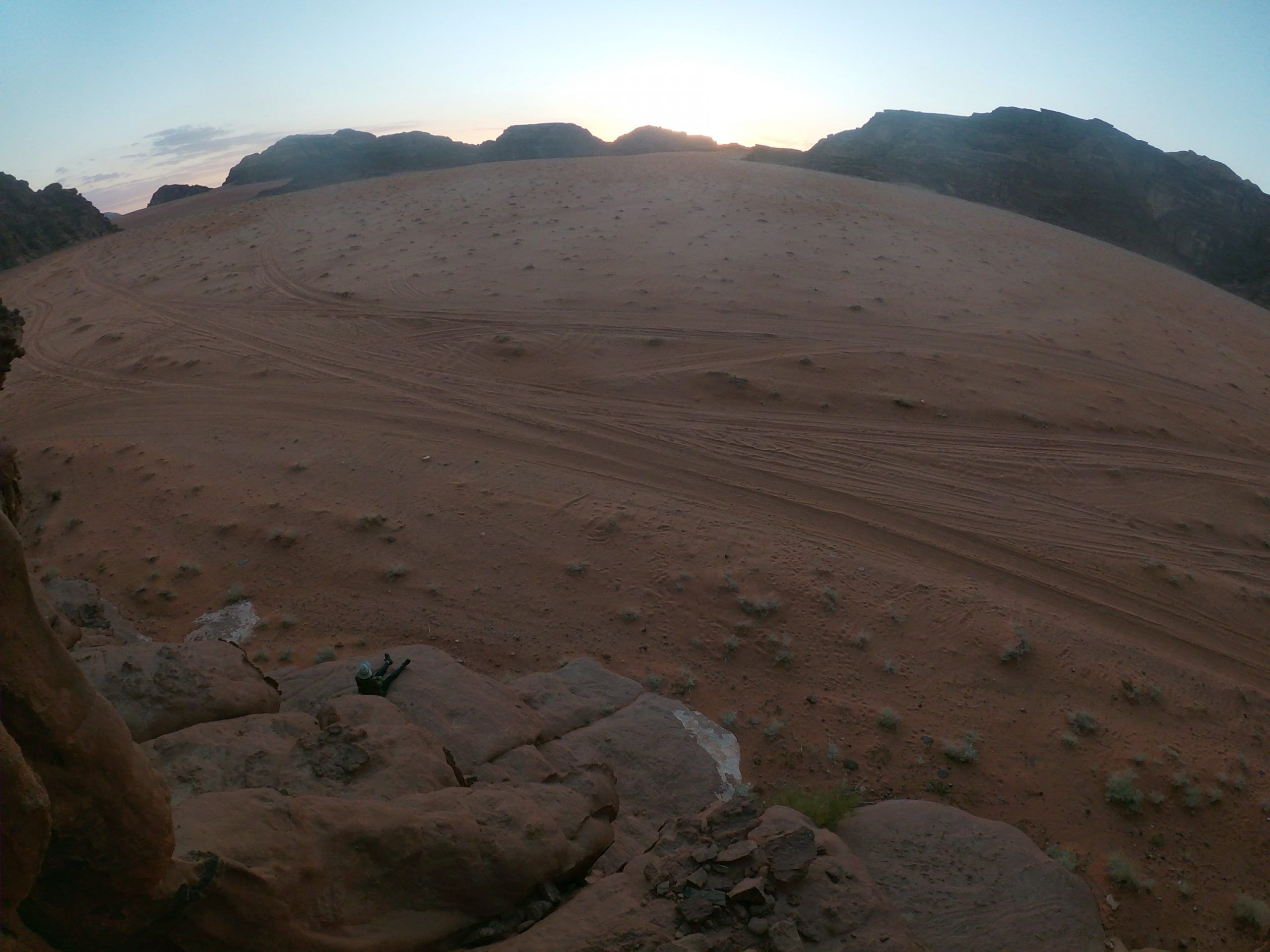 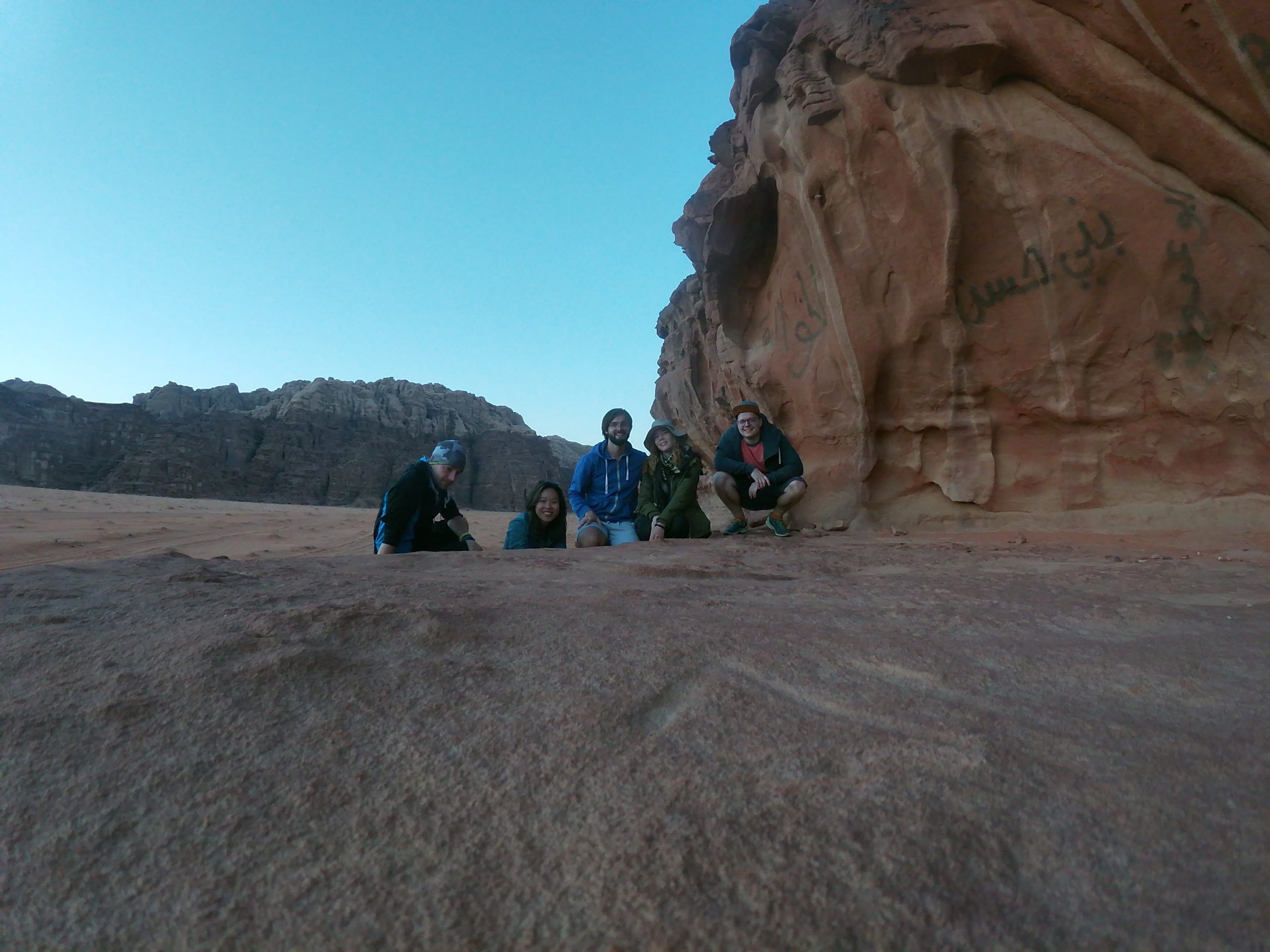 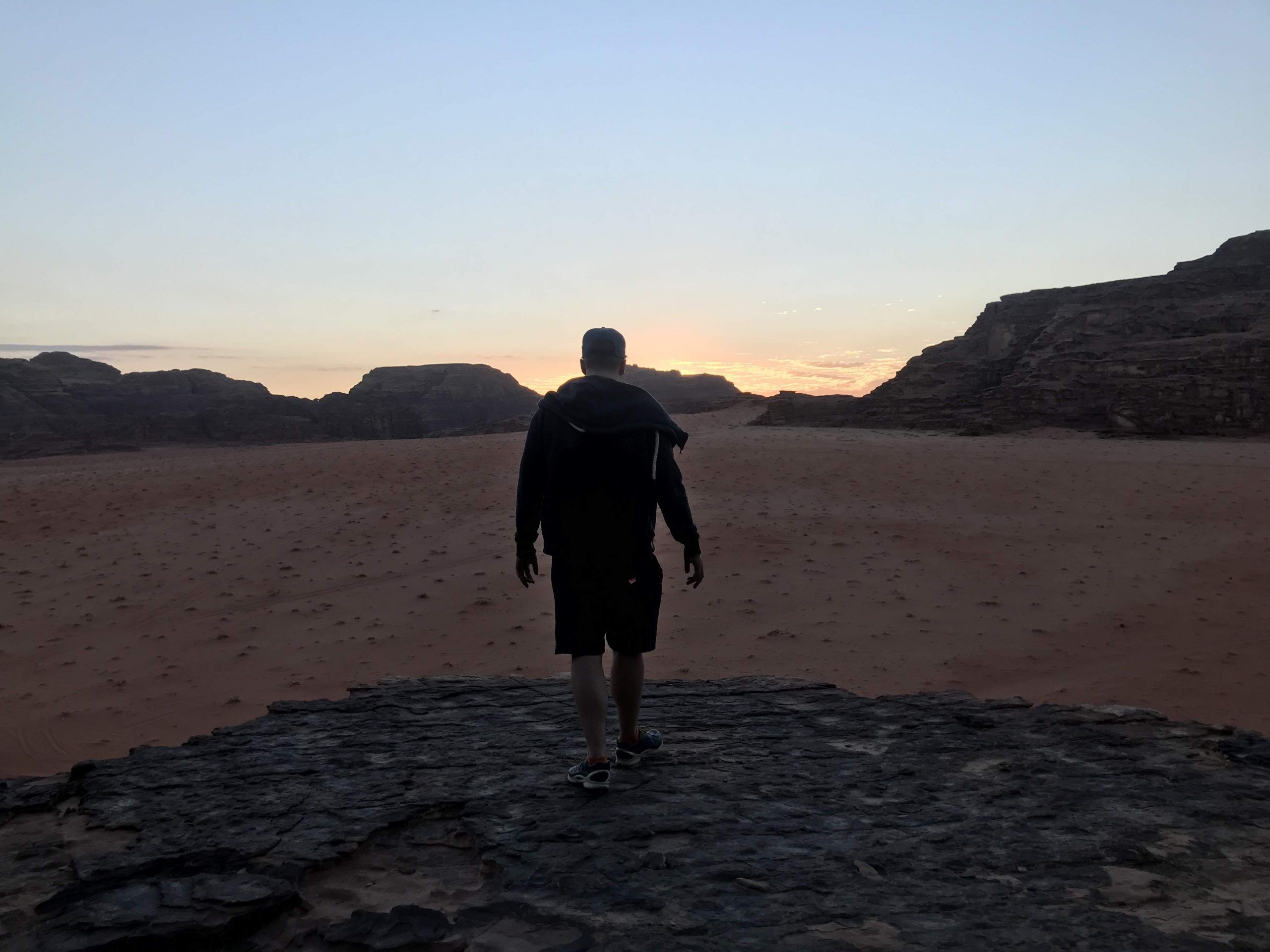 After climbing and fooling around on the nearby rocks we waited for the sun to come down. Sadly it was not as great of the spot for a sunset, as we thought. But none the less it was serene. 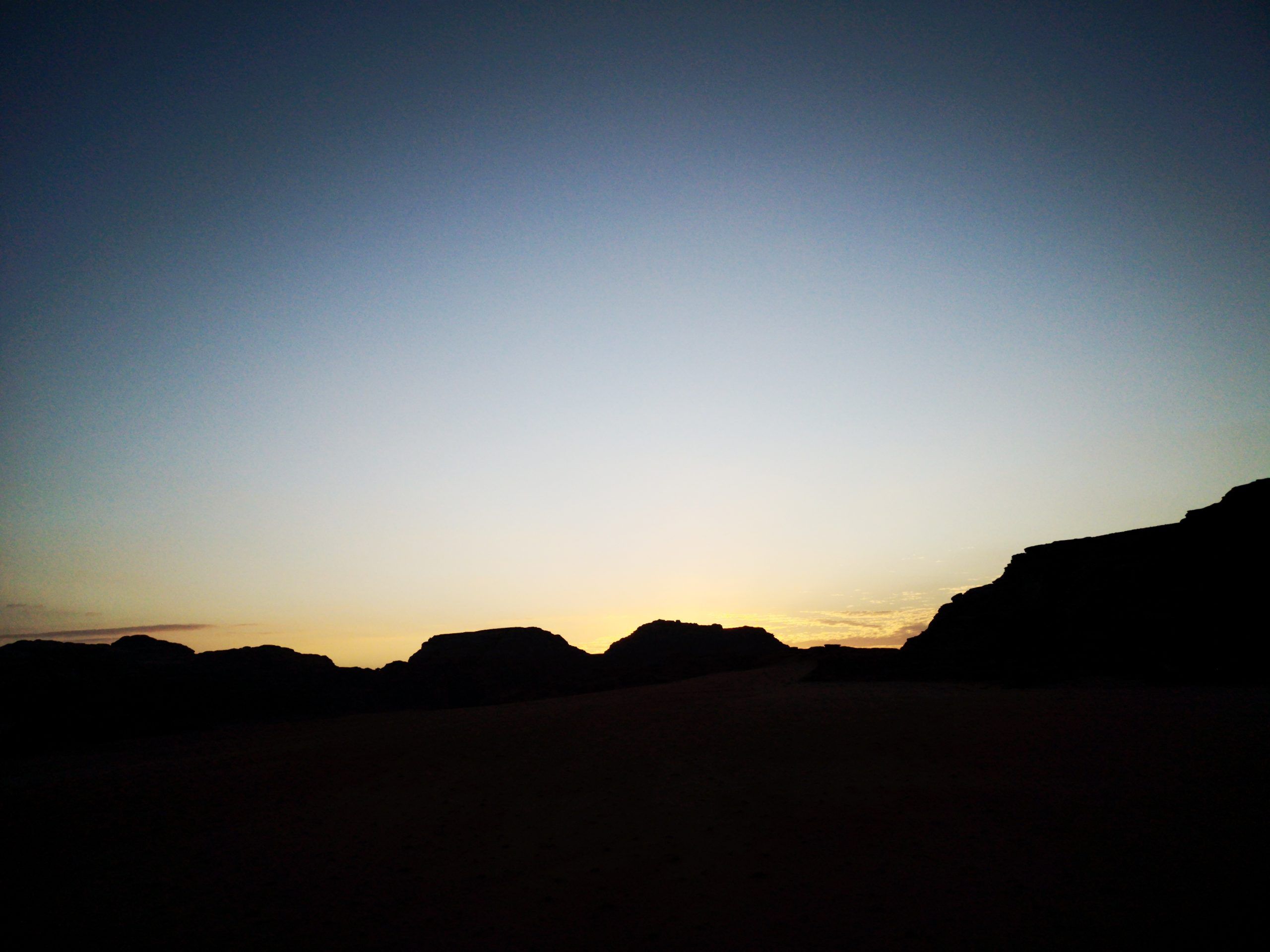 Once we arrived at our camp the Bedouin dinner was waiting for us. When it comes to the culinary delights of the desert, the wadi is well-known for a meal that is cooked underground called “Zarb”. Which in turn, if taken out too late turns the chicken dry. “Zarb is a centuries-old method of cooking, where the Bedouins place food on coal and cover it for two to three hours,”. Afterward, we were delighted by some local music. 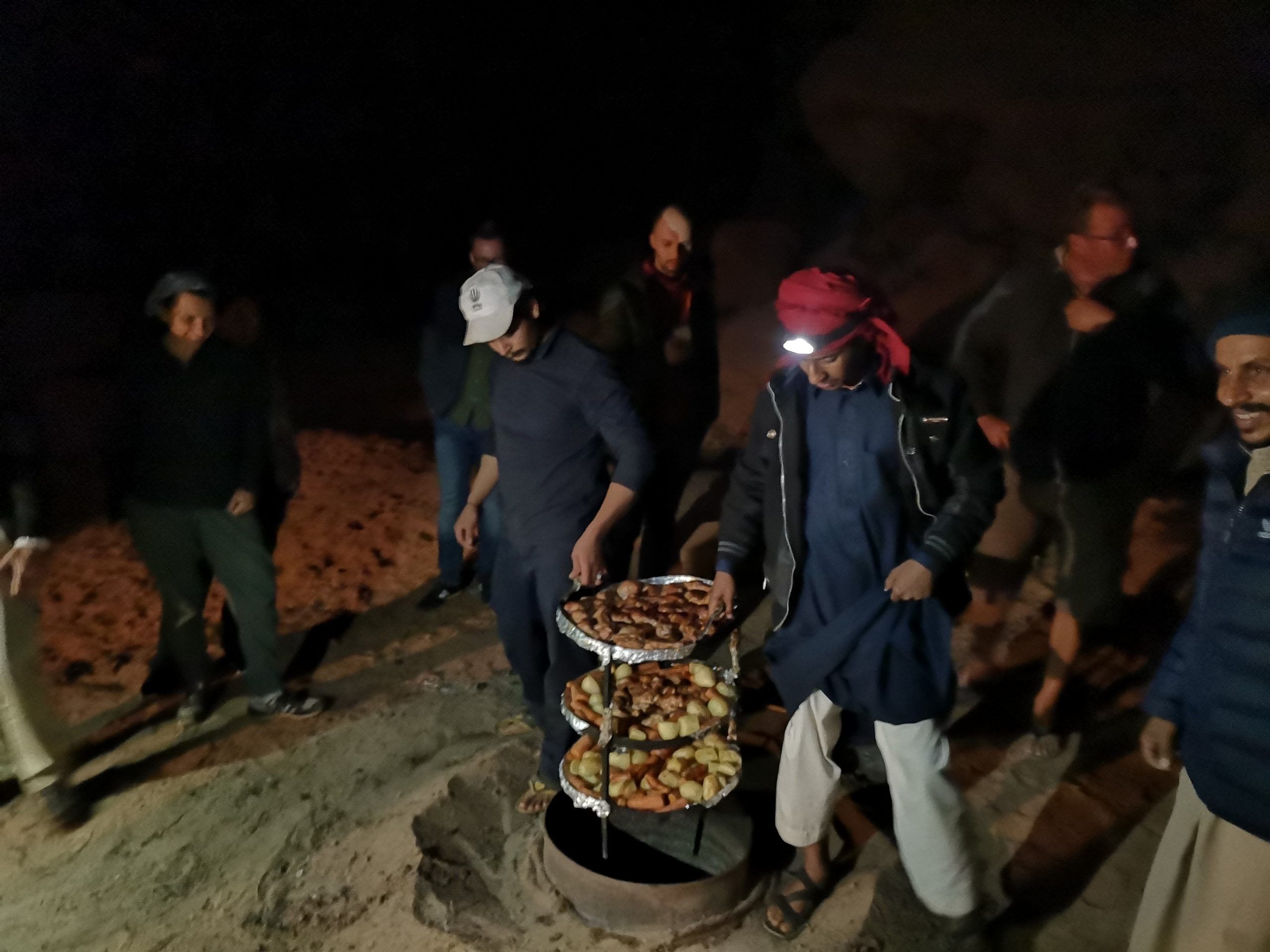 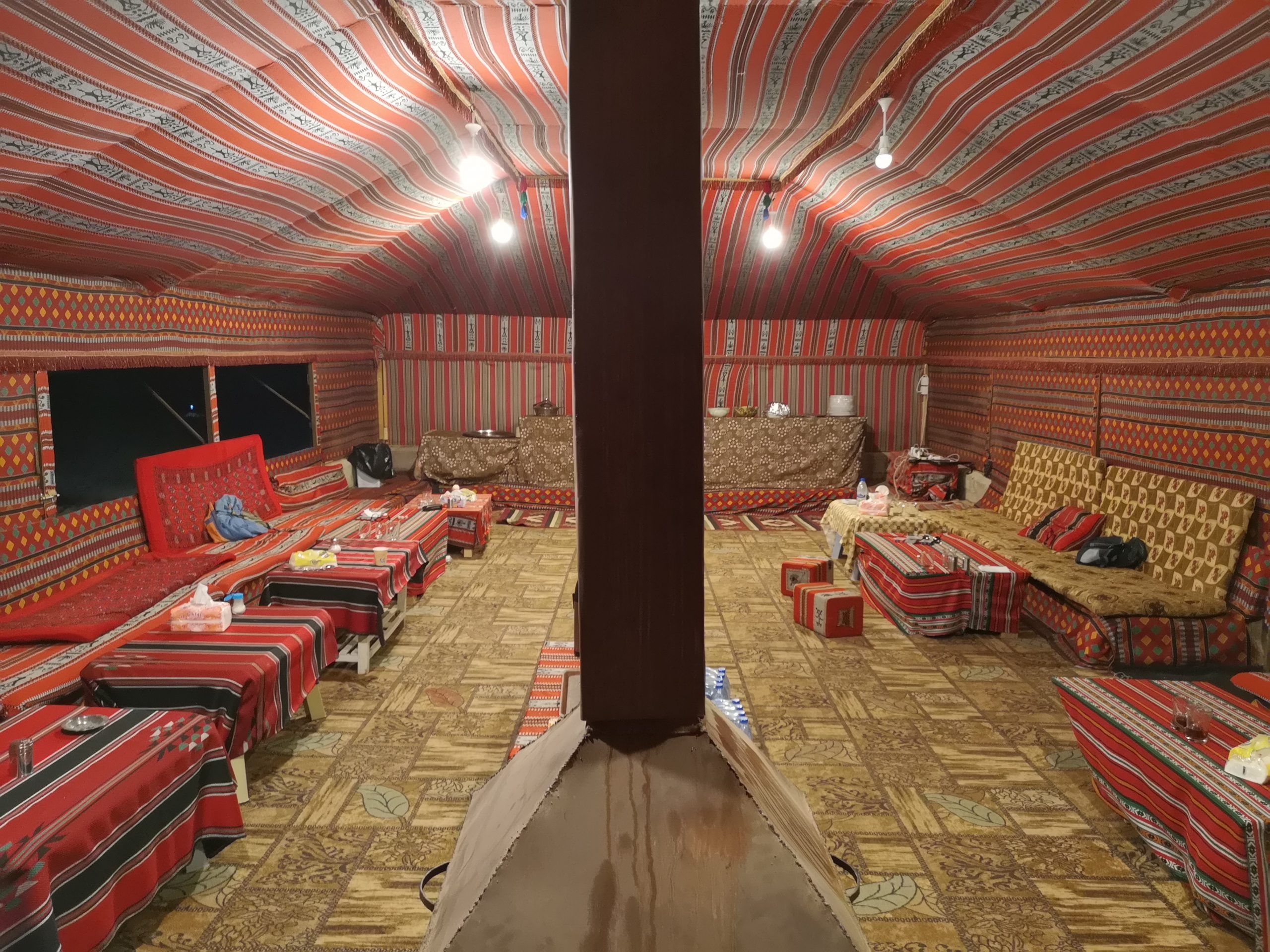 We have decided to have an early night just so we could wake up at 2 am in hope of seeing phenomena of the sky the milky way. We slept in an authentic Bedouin tent. The Bedouin tents are distinctive by its black color with white stripes. For a medium-sized tent, it is required two years to be woven, usually by the woman they usually use goat hair and camel lint that provides a good shelter even during rainfall.

However, the moon was shining too bright denying us the right to see the beauty that I have dreamed since my explorations of Bolivia.

However, the dead silence in the night was a surprise we did not expect. The silent high pitched ring in the ears the only sound that you could hear if you stay quiet and the total darkness that can hide anyone 2 meters from you. It is both scary and elegant. Another beauty of the desert. After this fantastic experience, we decided to sleep for the exploration of the mystical Wadi Rum awaits us tomorrow.